Home » Health & Fitness » Cancer and Cancer Cures, What Your Doctor Won’t Tell You?

Cancer and Cancer Cures, What Your Doctor Won’t Tell You?

Read this, even if you haven’t got cancer and not currently at risk. Keep it for future reference for yourself or someone else. It might just turn out to be a life-saver.

It may be interpreted as a death sentence when the doctor solemnly pronounces judgement, telling a patient that they have cancer. Indeed, this Earth-shattering news will leave no room for misinterpretation when the doctor tells the patient just how long he/she has got left to live. Having said all that, death doesn’t have to be the outcome: Here’s a whole load of things what your doctor won’t tell you because he/she may not even know about the following vital life-saving information. 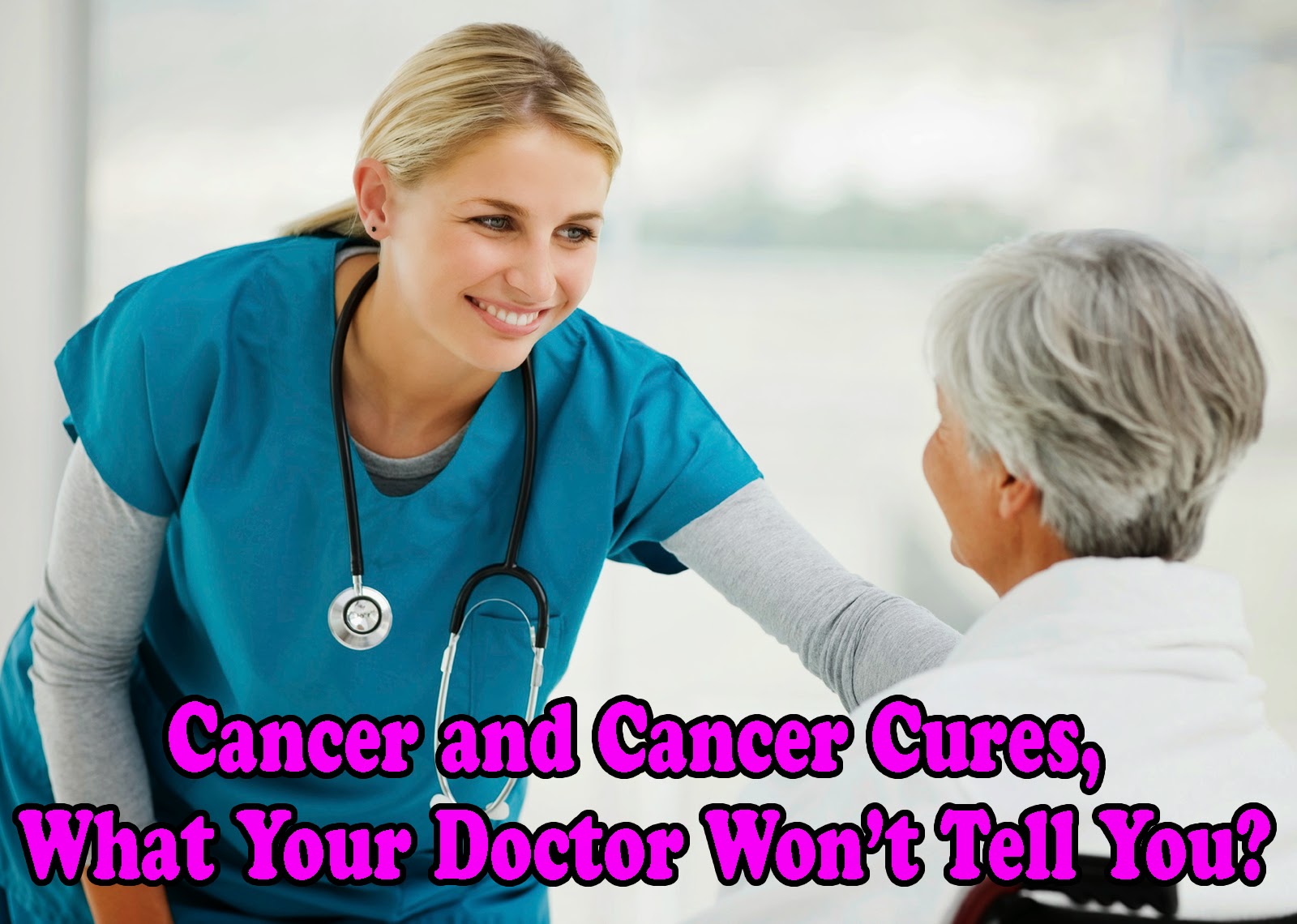 The first important thing to understand is this. Is the doctor’s short life-expectancy estimation of the cancer patient a way of saying that the soon to be administered orthodox medical treatment will be largely ineffective?

When someone becomes a cancer statistic it opens the double-doors to a whole host of sales reps keen to fix the patient up with one or a combination of orthodox medical cancer treatments; chemotherapy, radiation or surgery: Every thought, deed or action implemented will be based on the tens to hundreds of thousands of dollars/pounds to be made on the patient… Indeed, this seriously needs to be considered when most patients die of the treatment NOT the cancer.

Cancer and Cancer Cures, What  Your Doctor Won't Tell You?

The analogy I use is this. If you go to the butcher’s shop and tell the man you’re hungry he’s not going to send you to the vegetarian store, right? Well, the same applies to those in the medical/pharmaceutical establishment: Vested interest and money rules over genuine welfare concern and the medical/pharmaceutical establishment will not let any highly effective cheaper, natural and non-toxic alternative cancer treatment find its way into the limelight and undercut their business. From what could be gleaned from this there would be far less suffering and unnecessary cancer death… more about those highly effective cheaper, natural and non-toxic alternative cancer treatments later.

“If only the cancer had been detected earlier…” I’ve heard this said about many people who had died of cancer, including my father. Whether it’s through colonoscopies, mammograms, prostrate or Pap tests… etc, the medical/pharmaceutical establishment often chant the “early detection saves lives” mantra but is this really the case? Not according to some for the following reasons.

The overall evidence does not support the early detection theory. Sure, there’s been more early cancers caught but there is no proof that early intervention has made any difference to overall survival. It’s the opposite in fact. In a way, the more cancers detected the more, some might say, that ultimately nothing can be done long-term to prevent cancer deaths.

The idea that “early detection saves lives” is made improvable by the fact that many early cancers detected are not known to be malignant or benign. Hence, there have been cases of over-diagnoses and unnecessary treatment.

Further evidence in support of the above point comes from the startling fact that the majority of cancers are only found during post-mortem. For example, pathologists report some 30-40 times more cases of thyroid, pancreatic and prostate cancers than those alive with these cancers and presented to the doctor. In other words, these people died of something else; they had been able to contain (encapsulate) the cancer, and had rendered it as symptomless or harmless. The medical/pharmaceutical establishment doesn’t like to talk too much about the body’s ability to heal naturally. No money to be made there.

Orthodox medical treatment can cause cancer in many ways. For example, here’s an important message for women receiving treatment for breast cancer by radiation therapy and screening. You have a 20% plus higher chance of getting breast cancer than no treatment at all. That’s because of the potentially harmful mutagenic effects of the x-rays encountered during treatment. The solution is to be treated with infra-red thermography which is far less harmful. This startling information is never revealed: Think of the money lost by the ‘establishment’ if you found out and ‘defected’ to infra-red thermography… By the way, don’t fall for the nonsense statement that “mammograms save lives,” they don’t. The only truthful thing about mammograms is that they detect some cancer.

-I bet you’ve never read all this in your daily mainstream paper. That’s because they’re too busy playing propaganda patsies for their sponsors the medical/pharmaceutical establishment, chanting the unfounded mantra that early detection saves lives, allowing the stats to be fudged…

For me, the most eye-opening stat fudge is the 5 year survival rate. I’ve heard it said from time to time that someone has received orthodox medical treatment for cancer and they’ve been cured. Indeed, if it has been 5 years or over since treatment the official stat is ‘cured.’ However, the cancer can come back for example in year 6 and the patient can then die, making it a case of statistically ‘dead and cured’ all at once.

Why does the cancer come back?

This indeed is a key question. To answer, first we must ask another question. What is cancer?

First understand that cancer, like all diseases, is ONLY a symptom of some underlying root cause. The symptom may be treated effectively but because the underlying root cause is left untreated the disease (symptom) WILL eventually return. -I cannot stress this very important point enough.

So, to answer the above question “what is cancer?” it can be said that cancer (the symptom, knock on effect, warning sign…) is the result of a failing immune system (the root cause). This explains why orthodox medical treatment will never cure cancer because it only treats the symptom and basically ignores the underlying root cause and its reason for failing.

So the solution therefore is to deal with both the symptom and underlying root cause to stop the cancer. by Paul A Philips
Health & Fitness
Posted by Unknown at 00:58