Cold and flu typically affects 20%-50% of the U. S. population each winter. The flu and the common cold are both respiratory illnesses but they are caused by different viruses. Cold and flu are a highly contagious disease, spreading mostly by direct person-to-person contact. Coughing, sneezing or hand to hand contact will easily pass the virus on. The virus can linger in the air for as long as three hours.

Catching a cold or flu requires exposure to bacteria and viruses and a body with a weak immune system. When our immune system is compromised we are more susceptible to the viruses invading our bodies. The “compromise” can come from stress at work, lack of sleep, or other medical conditions.

There are no known cures for the common cold and flu, you can take one of a variety of medications that may help relieve your symptoms. Or you can take the natural approach. Many plants and healing herbs can be used to soothe symptoms of the cold or flu. 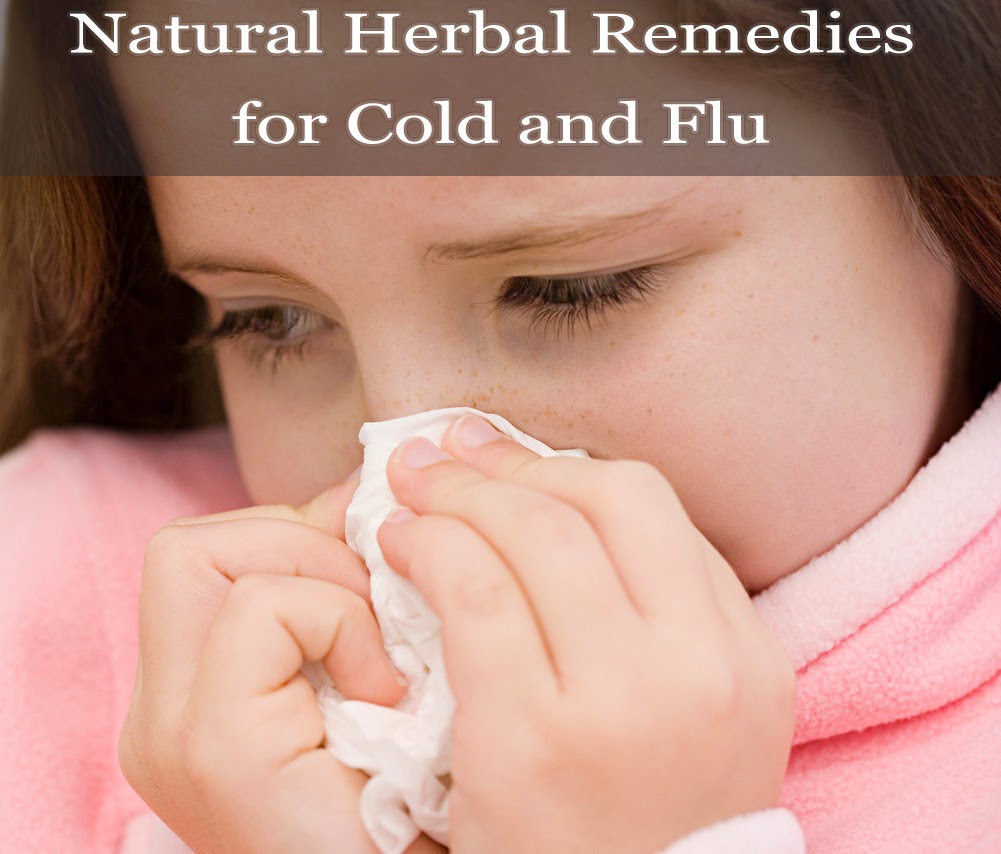 Here are some herbs are used to decrease the severity of colds and flu:

Echinacea stimulates the production of white blood cells and makes your body more capable of attacking viruses and fighting colds, coughs, flu and other respiratory conditions. The minimum effective amount of Echinacea tincture or juice that is necessary to take is 3 ml three times per day. More (3–5 ml every two hours) is generally better and is safe, even for children. Encapsulated herbs may also be effective, generally 300–600 mg capsules three times per day are used. Recent studies indicate that regular use of Echinacea to prevent colds does not work. Therefore, it is currently recommended to limit use of echinacea to the onset of a cold and to use it for only 7 to 10 days consecutively.

Garlic contains natural anti-biotic and anti-bacterial properties that can help fend off colds and flu. Chop and peel five garlic cloves. Cover with a half a cup of honey. Mix in a little cayenne pepper or ginger. Let sit for at least an hour. Take one teaspoonful as needed. You can also use garlic in cooking whenever you have a cold. Enjoy some garlic in your soup, or you can take it in capsule form.

It fights colds by removing congestion, relieving sinus pain and clearing sore throats. Drink a cup of ginger tea several times (at least 3 times) a day. Ginger contains a dozen antiviral compounds. And it tastes good. To make a tea, Cut off a one-inch piece of the fresh root and peel it. Grate it into a mug and pour one cup of boiling water. Allow to steep for 10 minutes. If you use dried ginger powder use 1/3 to 1/2 teaspoon of powdered ginger per cup. You can season it with honey if you want.

If you don’t have any of these herbs lying around in your kitchen, then try making this simple tea. Squeeze the juice out of a lemon into a cup of hot water, and add honey to make it less sour. Both honey and lemon are natural agents in soothing a sore throat. Lemons can also cause you to sweat, which helps lower a fever.

It’s been used medicinally for thousands of years in preventing infection and fighting poor circulation. Add small amounts of the powder to food. You can also add the powder or a cinnamon stick to an herbal tea.

Using Goldenseal powder as a tea or tincture may soothe a sore throat. Caution: Goldenseal root should only be used for short periods of time, up to 7 consecutive days. Take 10 to 15 drops of goldenseal in an alcohol-free form, known as glycerite tincture, two to three times a day for seven to 10 days.

An extract of the black elderberries produces beneficial immune actions and helps fight influenza and other respiratory viruses.

It has many properties that can relieve cold and flu symptoms. Don’t take licorice for more than four to six weeks — it causes your kidneys to retain water and sodium and lose potassium. Don’t take it at all if you’re pregnant, have high blood pressure or low blood potassium, or take a potassium depleting diuretic.

This hot pepper stimulates the circulation and can help to clear sinuses. Used in small amounts, cayenne pepper helps your immune system. Add small amounts to foods or soups when you’re under the weather.

It is a traditional remedy of long standing for soothing sore throats as it has antiseptic and anti-bacterial properties. For an inflamed throat and hoarseness use a hot sage infusion or gargle with a sage, apple cider vinegar and honey mix. In feverish conditions, sage is very cooling. Take as a tea or tincture.

This common kitchen herb is an expectorant, which means it helps your body to produce a more productive cough. To use, prepare a tea with one cup of the dried herb and one cup hot water. Let it steep for fifteen minutes. Strain out the herb and sweeten with honey if needed. Store it in the refrigerator and take one teaspoon every hour as needed. Only use this remedy for a day or two.

For a cold with congestion, inhale the steam of a chamomile extract or cup of tea. Drowsiness can be a side effect of taking Chamomile. Don’t use if you are allergic to ragweed. Also don’t use in large amounts if you are pregnant (more than two cups a day).

Traditionally used to treat upper respiratory infections and sinusitis, Andrographis, based on a recent study, showed a reduction in symptoms of coughs, sore throats, headache and fever. Take 400 mg 3 times daily with lots of liquids at mealtimes.

It has anti-inflammatory properties, and a hot yarrow tea will promote sweating. Many herbalists consider yarrow to be one of the principle herbal remedies for fever, feverish colds and flu.

Slippery Elm (Ulmus fulva) is a remedy from folk medicine that has long been used to treat sore throats. It is available as a tea or lozenge.

In a recent study, homeopathic doses of boneset effectively decreased cold symptoms. Boneset has been traditionally taken as a tea or tincture. To prepare the tea, add boiling water to 1/4-1/2 teaspoon (1-2 grams) of the herb. Allow it to steep covered for ten to fifteen minutes. Three cups (750 ml) a day may be taken (the tea is fairly bitter).

Mixed in equal parts with peppermint, Elder flowers help reduce the fevers and aches caused by colds and the flu.

Steam inhalations of Juniper is beneficial for relieving congestion in coughs and colds. Add a few drops of the oil to hot boiled water, place your face over the bowl, cover with a towel, and inhale the steam. by Lovel Rose
Alternative Medicine Health & Fitness Herbal Remedies Home Remedies Natural Remedies
Posted by Unknown at 02:14